Side note… if you don’t know what Recoil Magazine is, please familiarize yourself with their publication.  Recoil publishes some of the most interesting gun/gear related articles you will find and is intensely visually captivating.

The article explained my stance on 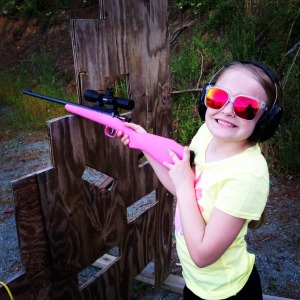 Whether or not a child should have a gun is a controversial topic. With firearms being so dangerous, why should a child, let alone a girl, even handle a firearm?

My daughter, Alison, was four years old the first time she shot a firearm, which was a .308 rifle. For the next two years, she begged for her own rifle. For Christmas, Alison received a 22LR Cricket Rifle, it was a very girly pink color. She loved the rifle, and learned to operate it without assistance. Under supervision, she manipulated the rifle safely and understood that it was a dangerous weapon. Alison’s love for her rifle was short-lived after seeing firearms that were semi-automatic. Her newest desire, as she put it, was “a pistol that could shoot more bullets faster, so that I don’t have to reload after every shot.” The following Christmas, she received a pink cerakoted Ruger SR22. At just under eight years old, Alison was proud to say “I have a single-shot rifle and a semi-auto pistol, both of them are pink!” She is amused when boys at school envy her for having guns and going to the range on a regular basis. 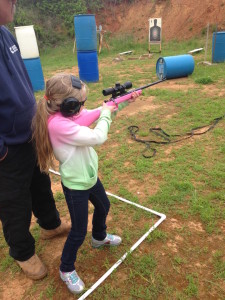 Alison is witness to my enthusiasm of firearms and to the sport of 3-gun. Going to the range is an activity we do together. She enjoys the instant gratification of shooting a steel target and hearing the “tink” sound from the impacting 22LR round. With excitement and a huge grin, Alison will yell “I did that! I hit that target! Did you see?!”

I’ve gotten into long-winded conversations, initiated by complete strangers, as to why in the world would I let my daughter shoot guns. Bottom line is, because she wants to. Alison takes pride in learning to shoot; her current goal is to shoot competitively by the age of 12. Her love of learning to shoot works to my advantage. I use this as leverage towards good behavior. If Alison acts out at home or school, she loses her privilege to go to the shooting range. There is also an underlying, ulterior motive to letting my little girl shoot guns. And, that is empowerment. Without her knowledge, I am shaping Alison into a strong-minded, independent young lady who is fearless of double standards. Alison does not care that shooting guns is historically a man’s hobby. Giving a young girl the power to believe she can do and be whatever she wants when she grows up is the gift of a lifetime. 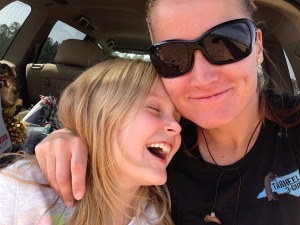 Originally written for:  GunUp the Magazine